skip to main | skip to sidebar

Foreigner Registration Office (FRO) has been elevated to FRRO (Foreigners Regional Registration Office) status with effect from 11 January, 2010. In view of increased number of foreign workers and business persons traveling to every year, the government of elevated the status of the Bangalore FRO to full FRRO.

The FRROs are bigger offices working mostly in the metropolitan areas and report directly to the Ministry of Home Affairs without the intervention of the State Home departments. The FRROs in are located at , Mumbai, Chennai, Kolkata Amritsar and now at .

In practical terms, it will not make much difference for the foreigners applying for the services like registration, extensions and other miscellaneous services at the Bangalore FRRO. The new timings for filing the applications are from 9:30 to 13:00. Under the old timings, the applications could be filed from 10:30 till 17:00 in the evening. So the applicants can expect longer queues at the window. However, the FRRO is expected to be shifted to a new bigger facility (probably at Indira Nagar in ) and get additional staff from the month of March and that should greatly reduce the waiting times for the applicants to submit their applications.

Regarding the procedural part, the FRRO will deal directly with the MHA at . This will provide for faster turn around times for the applications which require approval from MHA. For example, earlier, an application for the first extension of an employment or Business Visa, filed at FRO was sent to State Registration office at Police headquarters and from there it was forwarded to the State Home Department (located at Vidhan Soudha, ) which forwarded it to the MHA at . Now, the FRRO Bangalore will directly send all such applications to the MHA and act directly after receiving appropriate instructions from the MHA, .

In the long run, it is expected that FRRO Bangalore will streamline the procedures and provide better services and faster turnaround times for the foreigners applying for various services at the FRRO Bangalore.

Email ThisBlogThis!Share to TwitterShare to FacebookShare to Pinterest
Labels: FRRO/FRO offices and procedures

Visit our new site for this blog 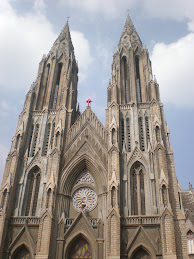 This website is a resource of general information regarding Indian Immigration issues. However, we provide no guarantees whatsoever, including but not limited to those of accuracy or applicability of the information contained in this site or information contained in a linked site. This website is not intended to provide legal advice and does not create any Attorney-Client relationship. We expressly disclaim any and all liability with regard to actions taken or not taken based upon the content of this website. You should seek the advice of a competent professional for facts related to your personal circumstances as the smallest variation in facts can have great impact on the legal outcome.